With a gross weight of 1900 lbs., seating for three and two 115hp engines, the new Gen 3 AirCam is sure to impress! Below is an excerpt from the March 2019 press release introducing the new model: 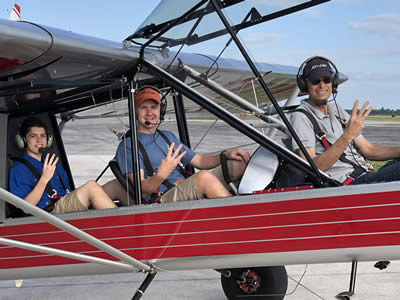 New Gen-3 model airframes have the option of incorporating a third seat located behind the second seat and a 220-pound gross weight increase from the current 1,680-pound max gross weight to 1,900 pounds. “The new jump seat will be quickly removable to convert between cargo and and third passenger,” added Lockwood.

The third seat can be installed in either an open-cockpit AirCam or one with the full enclosure canopy. The canopy was designed from the start to accommodate the third seat.

To provide the additional single engine performance needed for the higher gross weights Lockwood Aircraft is offering a new, upgraded 115-horsepower Rotax 912 power package. “Customers opting for the standard 100-horsepower 912 engines will be limited to the original 1,680-pound maximum gross weight,” Lockwood clarified. “The additional 15 horsepower per engine is achieved though an increase in displacement with no increase in weight.” Customers may purchase or retrofit either a carbureted 912 ULS or fuel injected 912iS engine package to provide 115-horsepower upgrades for either engine model. Buyers or owners can opt to install the 115-horsepower package at a later date.

“Numerous improvements have been incorporated in the new Gen-3 model airframes to accommodate the optional gross weight increase and jump seat,” said Lockwood. “The landing gear has been strengthened to accommodate greater landing and take off weights. Landing gear modifications include new stronger gear legs, a beefed-up fuselage gearbox and upgraded Beringer wheels and brakes.”

Phil Lockwood also reported AirCam’s aft section of the fuselage and tail spring have also been strengthened to accommodate the higher loads. The new fuselage incorporates a new set of foot wells to improve comfort and safety when utilizing the jump seat. These new foot wells also increase the volume of the cargo bay when not using the third seat. “You’ll also find harness attachment hard points that are built into the new fuselage for the third seat passenger,” Lockwood said.

The Sebring, Florida company noted that some float-equipped AirCams have already been operating at higher gross weights, up to 2,000 pounds, based on the capacity of the amphibious landing gear and increased lift provided by the floats at high angles of attack. The Gen-3 model airframe benefits are designed to allow for increased gross weights for land planes only.

View the embedded image gallery online at:
https://www.aircam.com/more-power-and-capacity-strengthened-fuselage-components-third-seat#sigProId6e9a759d35
back to top