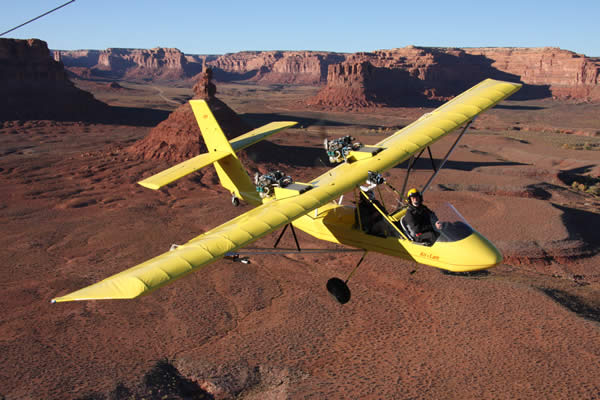 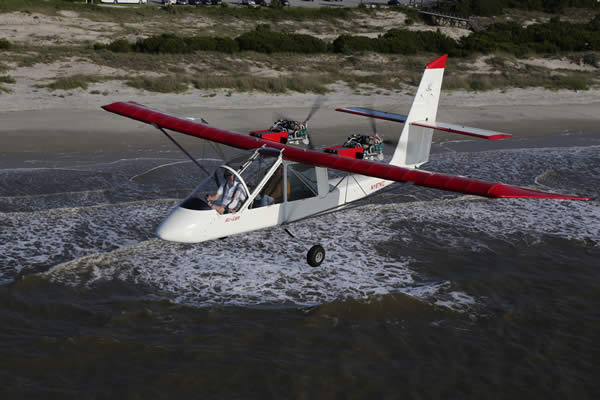 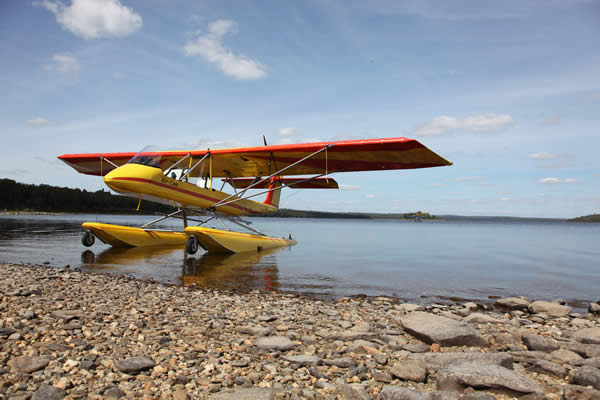 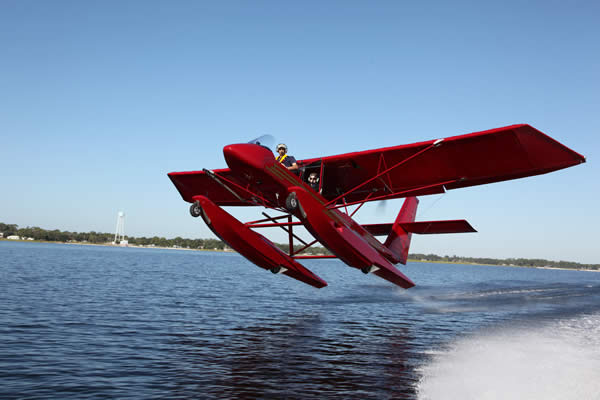 From Oshkosh to Sebring 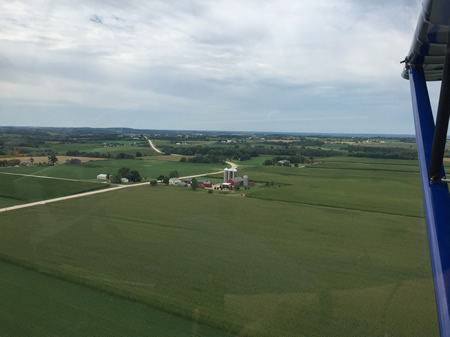 My friend Rob Gibbs and I had no sooner landed after flying from Sebring, Florida (KSEF), to Oshkosh, Wisconsin (KOSH) in 17.1 hours when Justin Smith started his queries as to who was flying the return trip with me.

"You already have a return ticket," I responded. "I bought trip insurance for $9," he replied. That's the best 9 dollars he ever spent!

Justin and I departed Oshkosh on Sunday, July 26, just 10 minutes before noon. "Air Cam 912LA, thanks for coming to Oshkosh; you are cleared for take off, Runway18 Right. Stay on runway heading at or below 1,300 feet till clear of the area." After I read back the controller's instructions, we chewed up 150 feet of runway for departure, climbed to 500 feet AGL and stayed there.

After scanning for weather on my Garmin 496, I told Justin we would be stopping for lunch at Pilot Pete's restaurant on Schaumburg Regional Airport (06C). We passed slowly over many beautiful fields and farmhouses with their barns in different states of repair and dropped down low on many of the lakes en route. There was also the occasional windmill farm that we would weave between, being careful to keep our 500-foot distance from them. Upon coming to the suburbs of the Chicago area we climbed to 1,800 feet MSL, 1,000 feet AGL. 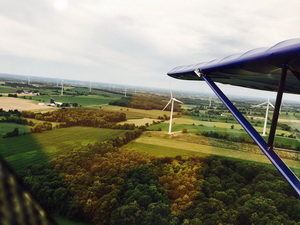 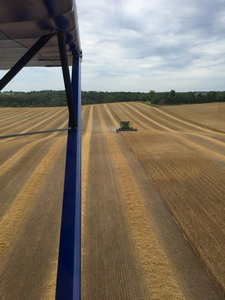 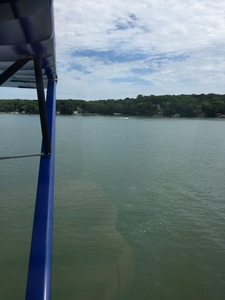 After chowing down on the best airport food I have had, it was time to depart. There was weather moving in from the west, and it was already due south of us 30 miles. I had told Justin he would be in the front seat for this and other subsequent legs. Justin is a University of Florida senior, expecting to graduate with a degree in aerospace engineering. He has worked summers and holidays for Air Cam since the summer between his junior and senior years in high school. Recently he has been working part time on your avionics packages while at school in Gainesville. 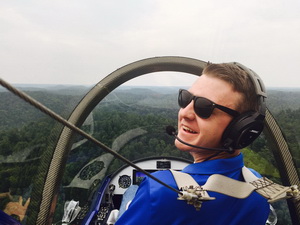 Leaving Schaumburg we punched in 86OH (Reed Field). This is Gary and Kay Reed's airfield at their farm just southeast of Cincinnati, Ohio. Gary and Kay recently finished their Air Cam. I had stopped there on the way to Oshkosh. What a beauty they built, and in just 5 months!

On the way to the Reed's we zigged and zagged a little for the afternoon storms dotting our path. It used to be a lot harder when I didn't have XM weather and a Smartphone with the hi-def radar app. At times the ceiling was "quite low," but—ah hell—it’s an Air Cam after all. 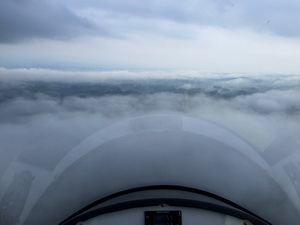 Flying with the full enclosure we were able to go through some light weather and, thanks to a Bose X20 headset with Bluetooth, keep everyone informed as to our progress and arrival time.

We arrived at Gary's and Kay's field less then 10 minutes after a strong storm with high winds and lots of rain had passed through. The runway was dry, but the swales had some standing water. Gary quickly escorted us to our hangar.

It rained even more over the evening and early morning hours, so we expected more low visibility and cloud layers at our departure time of 8 a.m. We were not disappointed. Less than10 minutes after taking off, we crossed the state line from Ohio into Kentucky. We shifted back and forth from flying a few hundred feet off the ground to 1,000 feet AGL, as well as changing our heading left and right to avoid the areas with miserable visibility. We were in the foothills, but in just a few miles the mountains would be starting.

The only way to continue on to cross the mountains VFR this morning was to stay low, scan for terrain, and move from saddle to saddle weaving our way through. If we were in any other type of aircraft, I would not attempt this today. That said, I have crossed the mountains many times using this method while others are stuck on the ground. 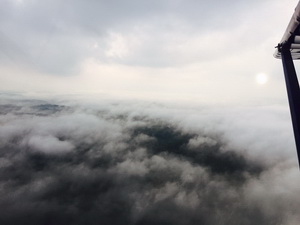 We had enough fuel to continue on another hour and my intended airport was only 20 minutes ahead, but with the visibility so poor we opted to land at Midddlesboro, Kentucky (1A6), which was only six miles off our course and just short of the Cumberland Gap. 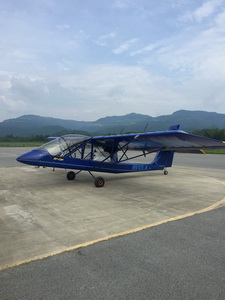 With tanks full I felt good about continuing on without delay. I knew there was a high-pressure area that we would reach in another hour or less. By the time we were east of Gatlinburg, Tennessee, the clouds had lifted. Good thing too, because poor visibility is often the norm when crossing the Great Smoky Mountains. 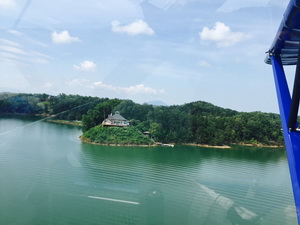 Last year while flying to Oshkosh, Marc Becker (manager of Rotax Aircraft Engines) and I spent two and a half hours flying from Rome, Georgia, to just north of Bowling Green, Kentucky by way of Chattanooga, Tennessee, and the Tennessee River. The ceiling was at 600 to 800 feet the entire way; we flew the valleys and the river, the whole time scanning out on the terrain map to find where there were saddles to cross over from valley to valley. Times like those are Air Camming at it's best!

Crossing the Smokeys was not to be a problem today. The weather had cleared, and it was smooth flying ahead. Of course, we are still going to stay just a few hundred feet over the terrain. It's the best way to see the world. Basically good weather or bad, you're at the same altitude in an AirCam. 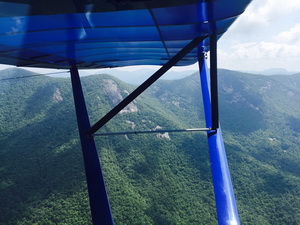 Crossing from Tennessee through North Carolina and on into Georgia, we continued to enjoy the first hours of good weather we’d had on the trip up. Do you know how many chicken farms there are in Georgia? We lost count, but everyone in the countryside there should have the last name of Tyson or Perdue!

Sandersville, Georgia, just east of Macon, was our next fuel stop. For some reason we felt like eating chicken for lunch. Justin was amazed that I had never eaten at a Zaxby's. It was 2 p.m. and the day was heating up. We filled the tanks and were on our way.

Once again we encountered more bad weather. It was not a good time of day to be crossing southern inland Georgia in the summer and it’s even worse as you get into Florida. I had planned on fueling at Keystone, Florida, but there was a solid line of thunderstorms from Jacksonville to just east of Lake City, with even more south of Lake City all the way to the west coast. We "beat feet" to Lake City (that’s 90 mph in an Air Cam).

It was 5:30 p.m. and the FBO was closing up shop at 6 p.m. We asked for a hangar and were informed we were 15 minutes too late. Quickly we took on our fuel and left. I had checked the hi-def radar app and saw that there was one small opening we should be able to get through. As we approached the storm line, it started raining, but not heavy. (Remember, we are in the enclosure.)

There was about a three-mile separation between the two storm cells—just enough to feel comfortable with since I could see on the app that it would clear up for a time shortly after getting through.

We were hoping to get into Sebring before nightfall, but with weather being spotty ahead, a 19- to 22-knot headwind and sunset at 8:17, I could see we were not going to make it. Conditions were poor, so I avoided Gainesville's airspace and set a course for Apopka (X04). This is my hometown, and Dan Drummond has a very nice hangar there that I've had the occasion to use a few times. Apopka is one of the few public airports where you can own the land underneath your hangar. It's a very successful small airport with many hangars and lots still available.

Bose, Apple and Bluetooth to the rescue again, I called my wife from the air and let her know she could expect two for dinner. Once again we landed in marginal weather with the 19-knot winds only 30 degrees to the east of our runway heading. Luckily it quit raining as we pulled up to the hangar, and my wife arrived as we finished pushing the plane in.

We took off in a light rain the next morning. Winds were still 19 to 22 knots off our nose, turning a one-hour flight to Sebring into an hour and twenty minutes. It took a total of 17.1 flight hours to fly from KOSH to KSEF. We used 102.7 gallons of fuel for an average burn of 3.0 gals/side. Our IAS was almost always 90 mph.

Even with all the poor visibility and bad weather, at 300 to 500 feet the scenery was stunning, and I can't think of any plane I would have rather been in for this trip!